How I crowdfunded my book on Kickstarter

I recently wrote a limited edition book of essays called VANISH. I used Kickstarter to crowdfund the book, as a way of giving myself an external motivator to actually finish writing it. You can see the campaign here.

In this post, I’ll break down what I did to make Kickstarter successful, and then give you some tips for your own crowdfunding campaign. 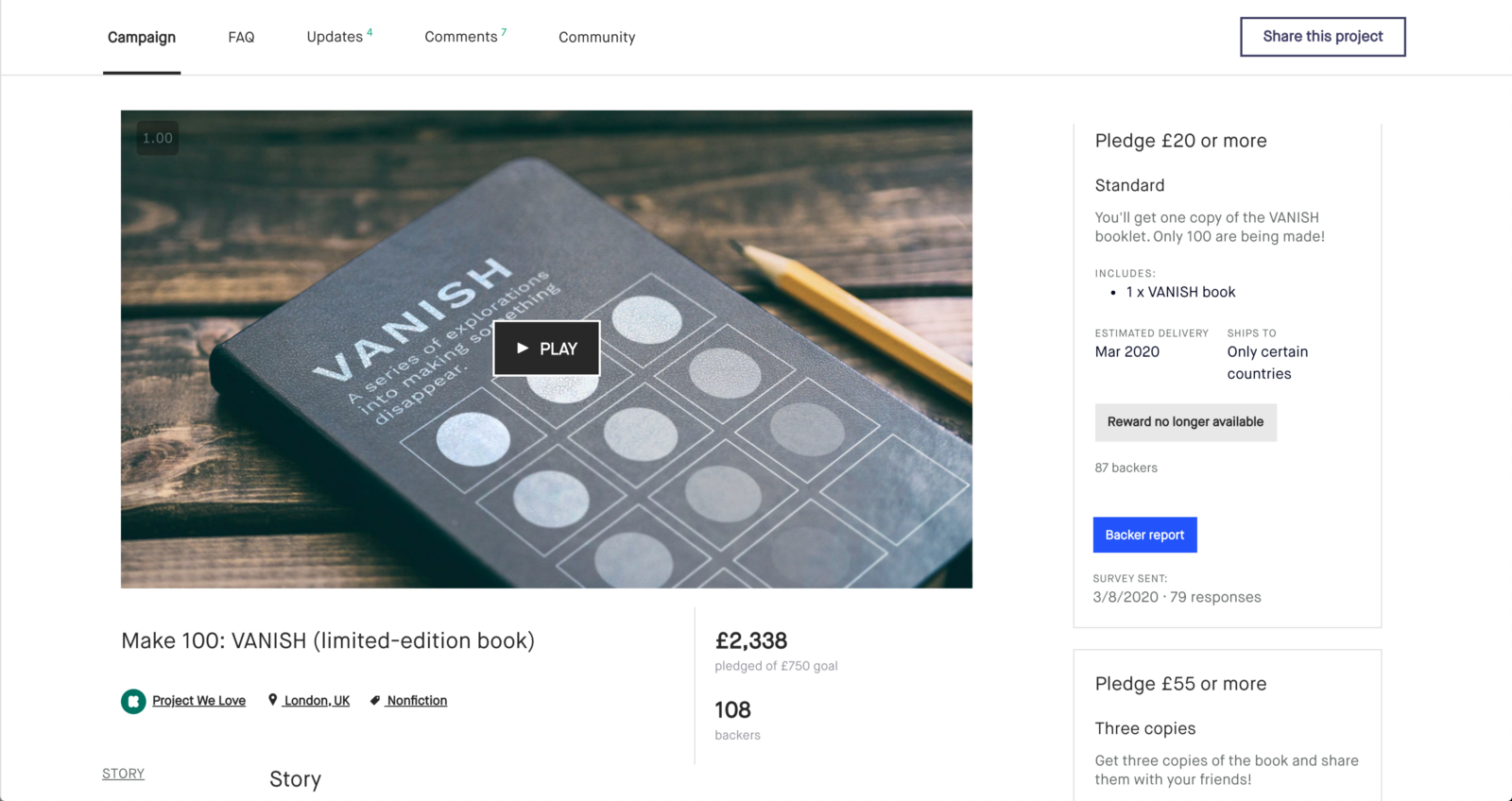 I’d been loosely thinking about VANISH for a while before I launched it on Kickstarter. Initially, I thought of it being a zine that would be sold at a magic convention, rather than as a full book. But what really nudged me into putting it on Kickstarter as a book was an initiative called Make100.

Make100 is a challenge to creatives: make 100 of anything, and fund it by selling them to early backers on Kickstarter.

I’m really grateful for this challenge. Selling 100 copies of a book seemed like an attainable goal. It gave me the kick I needed to launch the campaign. So I launched my campaign at the end of January 2020, before Make100 ended.

On the surface, my campaign was hugely successful: I reached my funding goal after just 22 hours.

The funding goal is something you set yourself, so it sort of becomes arbitrary.

To work out what amount to set as a funding goal, I worked out the cost of producing each book (based on a minimum order of 100), plus the costs of making the postcards I knew I wanted to include, plus the shipping cost. I also factored in Kickstarter’s fees and payment processing fees. I set the price per book so that I had a comfortable profit margin when taking these costs into account, so if anything went wrong it was covered.

For me, that amount was £20 per book, with free shipping in the UK and £5 extra for shipping internationally. I know that £20 may sound like a lot for a book (especially one I hadn’t written yet). But remember: this book was a magic book (magic books sell at a premium) and was also a hardback limited edition issue. So for me, the price was justified.

Based on all of this, I set my funding goal at £750. I reached this goal in less than a day. 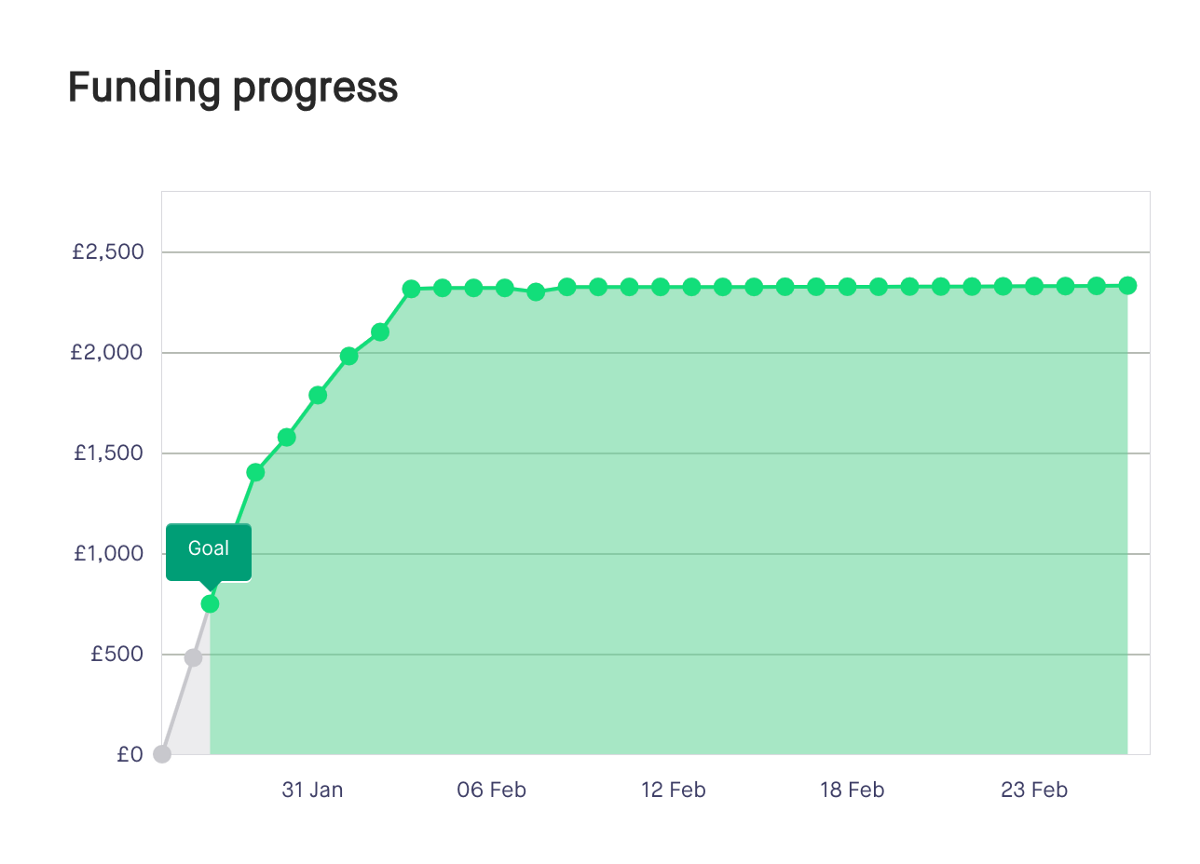 The above graph shows the funding progress over the course of the 30 day campaign.

You can tell that, because I limited the amount of copies I sold to 100, I screwed myself over. If I hadn’t committed to a limited number of copies, I’d definitely have been able to sell more copies during the campaign. It’s also likely that I could have sold more now, given that I now have photos of the physical book and positive reviews from people who’ve read it.

But… limiting it to 100 copies was a condition of Make100, and Make100 is what made me do this in the first place.

So I guess it was a good thing, overall.

Tips for a successful campaign #

I’d backed a lot of Kickstarter campaigns before launching mine, so I sort of knew what made for a good one.

Lots of unsuccessful campaigns have rambling descriptions laden with typos. The best campaigns get straight to the point. Your idea should be distilled to a single sentence.

My description had five short sections below the video: Summary / What’s in it / Who’s it for / I need your help / About me.

You’re asking for help, so don’t be ashamed of it. By making it clear that you’re doing this by yourself, people will want to help you and will respond better to The Ask.

…but don’t worry — you don’t need a lot. If anything, less is more, especially if you’re embracing your indie-creator-budget. I had one image of the book: I created a mockup of the book on Photoshop, so people could visualise it (the book ended up looking quite different). And I had a short video of myself talking to camera, that was shot on my phone — I just made sure to be in a quiet place with good lighting.

It’s easy to undervalue your effort or underestimate your costs. Don’t. Also, don’t go overboard with reward tiers. I had three tiers: a thank you / support tier for £1, the book for £20, and an early-bird tier, which was only available for the first then backers, and had the book for £20 plus an extra essay.

You’re asking people for money. You’re not selling them a product that will ship immediately. You’re asking them to invest in you.

So you need to be upfront, direct, confident and honest.

Kickstarter have a selection of projects they tag as ‘Project We Love.’ My project was selected to be part of this, and meant it was featured on the Kickstarter homepage and in emails they sent out. It definitely increased my sales, and required no extra effort on my part.

I don’t know how they select projects, but if you follow the above advice, you’ve got a strong chance of being selected.

Completing the crowdfunding campaign is only the beginning. You then have to write the book. More on that soon… 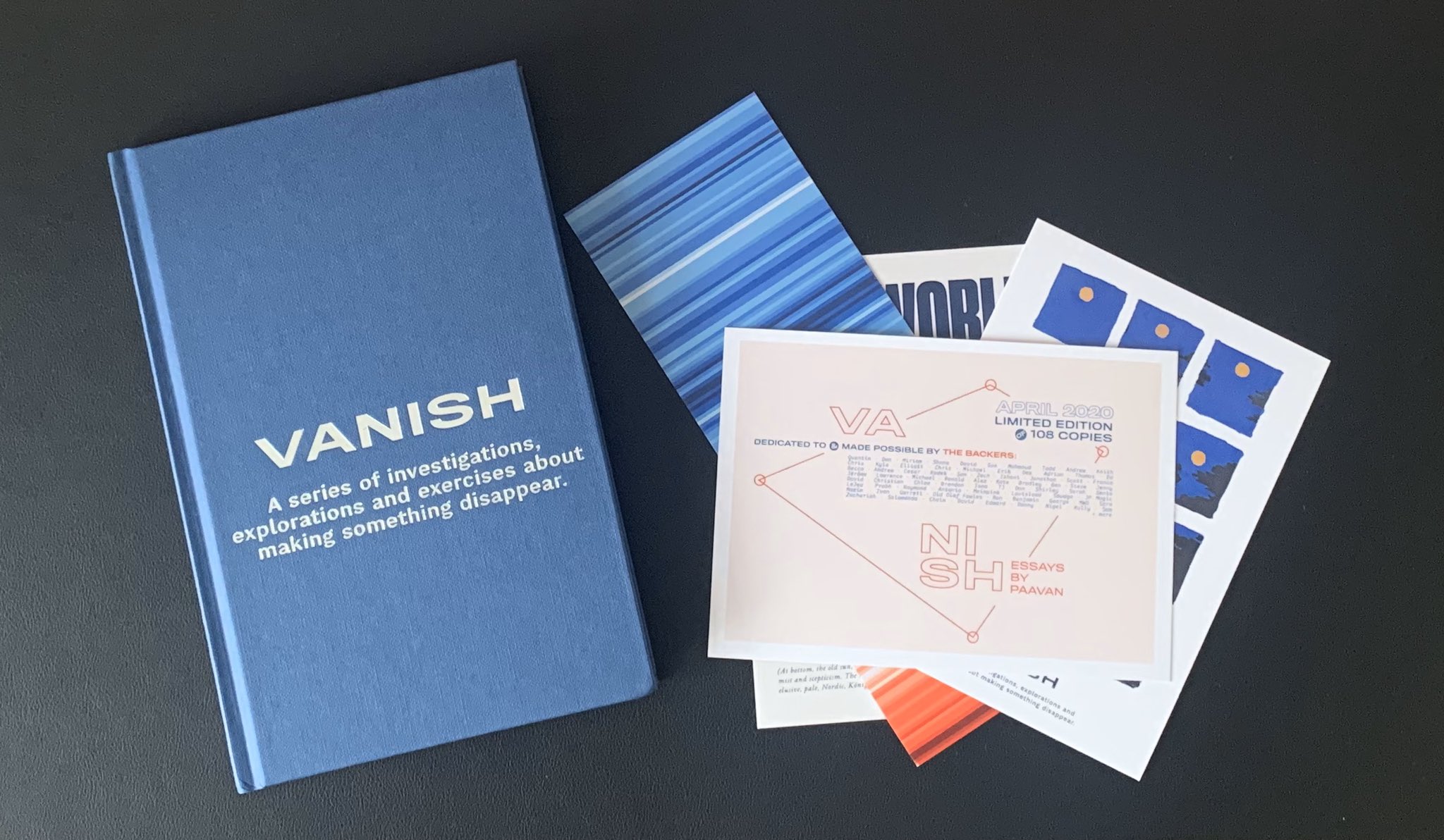 Read more articles tagged Books, or check out everything.