What makes a good opening trick at a close-up gig?

Well, our opener has to be something which establishes that:

This is a lot to convey in a few minutes of magic.

Luckily, you can get through a lot of it with your introduction / approach. Let’s assume you’re doing card tricks at a drinks event, maybe a champagne reception before a business dinner. By approaching a group and saying something like

Hi there! Sorry to interrupt — I’m the magician for the evening. Would you like to see a quick magic trick?

you can cover points 1 and 2. And, if you’ve got a friendly and confident manner, you can probably make a good start on 4 and 5.

But what about point 3? How do you quickly convince them you’re a good magician, while coming across friendly, entertaining, not-arrogant, and with a normal deck of cards?

That’s what this trick is for.

Effect: The spectator chooses a card. It’s seemingly a free choice every time, but as the magicians tells them not to pick that one… the card says ‘Not That One.’ They try again, but pick the same card. This process repeats; each time, despite seeming like a free choice, the spectator chooses the Not That One card. Exasperated, the magician shows that every other card is made up of blank cards. But, with a snap of the magician’s fingers, the ink reappears on every card.

You repeatedly force a card, and then do a reverse spread with the Ace of Diamonds at the face to show a ‘blank deck.’ Nothing revolutionary! But, given the above, I think this makes for a great opener. 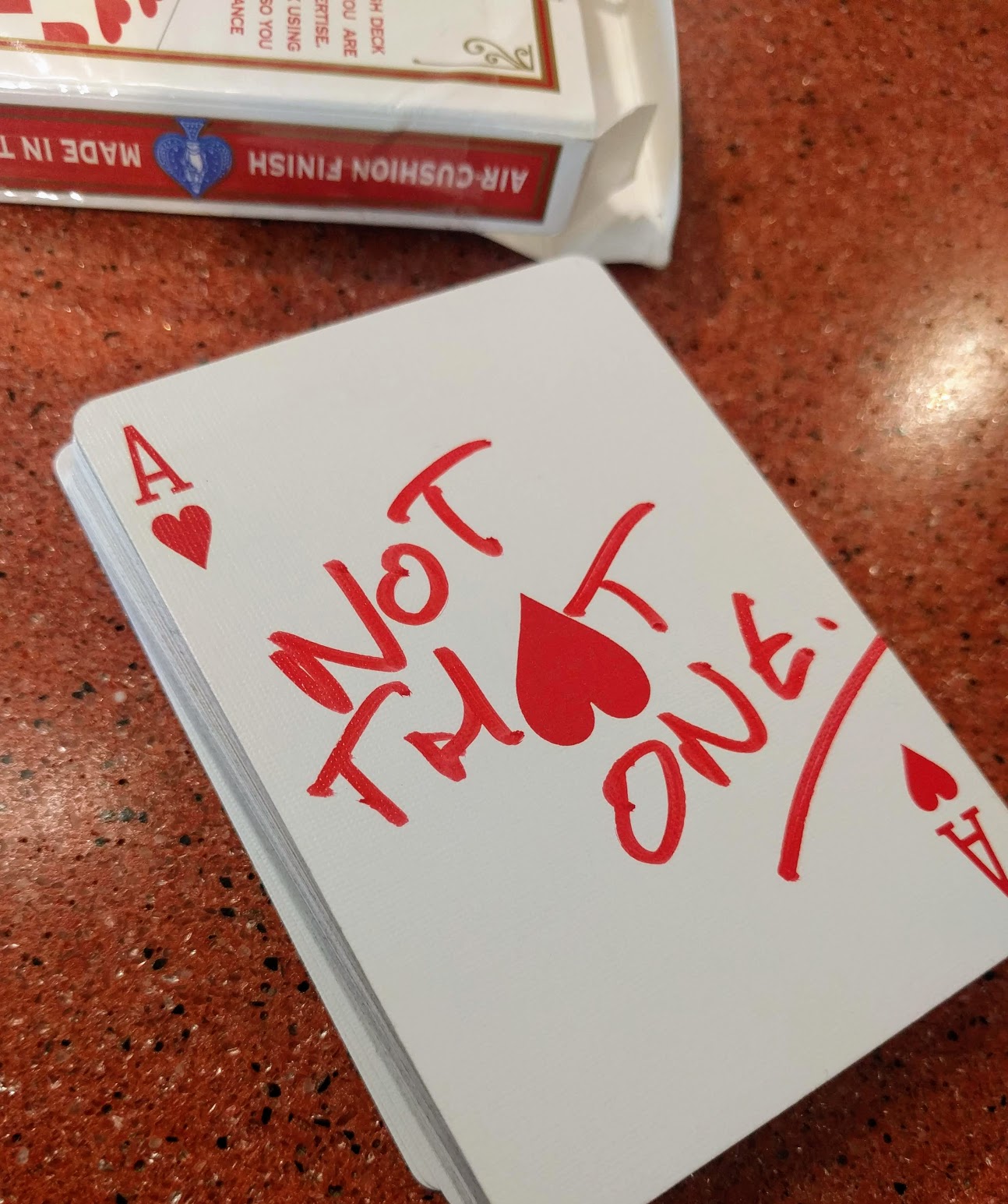 I’ve written this out in a lot of detail, but please remember, this is a super, super quick trick, and just introduces you before you do a lot more magic.

Setup the deck by finding the two red aces. On one of them, write ‘NOT THAT ONE’ using a red Sharpie. (Pro tip: At gigs, I always use a red Sharpie inside a Sherpa case. It’s just a personal preference, but I think it brings a bit more colour to a performance than just having black Sharpies.) I use the central heart on the Ace of Hearts to form the ‘A’ in ‘THAT.’ Place the Not That One card on the top of the deck, and the other Ace below it.

Approach the spectator with a smile and with the deck held out. Say your opening line — as you say it, you’re already gesturing towards them to pick a card out.

(Approaching them with the deck held out helps with point 2, conveying that you’re a magician, and having your hands out and an open body language helps to subconsciously get the spectators on your side. And, if one of them has been at an event with a magician, they’ll (hopefully) be excited and eager to see what you can do. There’s a lot more I could say about approaching groups, and how to build confidence if you’re new to it, but I learnt it all from Jamie D. Grant’s wonderful book, The Approach.)

Classic force the force card while saying ‘Take out any one of these cards…’. After they’ve taken it out, and as they’re turning over, let your face drop, and in a serious voice, continue: ‘…but not that one.’ They’ll look at you, confused, then look back at the now face-up card, realise what’s happened, and laugh. I’m labouring this in-detail but this should all be in one fluid sentence and gesture, and happen in a mere matter of seconds.

If you’re worrying about the classic force, don’t. The main reason that classic forcing doesn’t work is that a spectator has a reason to doubt you or a desire to challenge you. If you follow the above advice and opening line, they should be intrigued, curious, and on your side — and they’ll take the card you give them.

Continue the trick by shuffling the Not That One card back into the deck, and forcing it in a different way to someone else. Again, say they can choose any card… but (as they turn it over) not that one.

Continue this for as long as you have different forces, until, feigning exasperation, you exclaim “I can’t believe you keep choosing the wrong card, especially as all the rest are blank.” At this point, they’ll have the Not That One card, and you’ll do a reverse spread. Have the Ace of Diamonds on the face of the pack (either keep it controlled throughout, or cull it to the face). Your thumb covers the pips and the center diamond, meaning the pack will look completely blank. You only show this for a second, before closing it back up.

Whenever you want, you can have a spectator click their fingers, and all the cards magically ‘come back’. You’re then ready for your next trick.

I really like this trick as an opener for a number of reasons. As I said above, I like approaching holding a pack of cards. I don’t like overly-flashy openers, with flash paper or elaborate card flourishes — they’re not my style. I find that approaching in an understated way is charming and disarming and sets me up for some really impressive miracles later on.

This trick also builds up in a nice way. It follows an absurdity curve: it starts off a bit odd and quickly gets bizarre. (If you haven’t heard of this, it’s something improv comedians use when creating sketches on the spot.) All the subsequent tricks should also be on this same curve, that builds slowly and then very quickly. As this trick is by no means the most miraculous trick, it means I still have lots of room to build up from it.

Lastly, it’s practical. Other great openers I like are Truth in Advertising by John Guasteferro, and the famed Chicago Opener. But they both need a gimmick (albeit only one card). This trick, however, is easy to set up from a new deck, as you just need a Sharpie, and easy to set up after leaving one group, as you just need to find one or two cards. You can just keep the Not That One card in the deck, and if it comes up in another trick you can make a joke about it.

The main drawback of this trick is that it sort of ‘gives away’ what forcing cards is by making a joke about it. You never repeat the same method of forcing, but arguably by just repeating any force, your spectator will learn that you can control and force cards. But I’m okay with this drawback — none of the rest of my tricks rely heavily on forcing, and moreover, because you’re make a joke about it, your spectators are unlikely to really hone in on it.

Have fun with this!